You are here: Home / Packers / Rodgers sits out Monday workout! 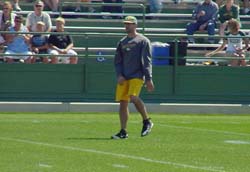 coach Mike McCarthy held him out of workouts because of a sprained foot.  McCarthy said the injury was not serious and he wouldn’t say if Rodgers will play at all in the preseason finale against the Kansas City Chiefs on Thursday.

Rodgers didn’t play in the final preseason game last year and he was 100% healthy at that time, so one would believe that he won’t be suiting up on Thursday against the Chiefs.

If Rodgers doesn’t play, that means Matt Flynn and Graham Harrell will get all of the reps in Thursday night’s game.