You are here: Home / Archives for Aaron Rodgers 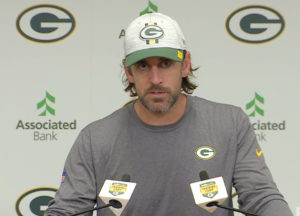 Rodgers believes all his years of service, three MVPs and a Super Bowl ring has earned him the right to be in the conversation on personal matters, even if he couldn’t sway GM Brian Gutekunst’s decisions.  He wants to be a recruiter in free agency and he wants the Packers to commit to him beyond the 2021 season. END_OF_DOCUMENT_TOKEN_TO_BE_REPLACED

Did the wide receivers fail to show up as a move of solidarity in support of Rodgers?  Coach Matt LaFleur said he recently talked with all five and didn’t feel it was a coordinated effort.  But missing all five certainly seems fishy. END_OF_DOCUMENT_TOKEN_TO_BE_REPLACED

Rodgers and the Packers are at a reported standstill as to whether or not he wants to play for the Packers any longer.  He has spent all 16 years of his NFL career in Green Bay to this point. END_OF_DOCUMENT_TOKEN_TO_BE_REPLACED The Packers will follow that with another prime-time matchup in week three on Sunday night, Sept. 26 at San Francisco. END_OF_DOCUMENT_TOKEN_TO_BE_REPLACED

ESPN reported that Gutekunst, Packers coach Matt LaFleur and team president Mark Murphy each met with Rodgers on separate occasions during the offseason and according to the NFL Network, Rodgers had his agent (David Dunn) recently fly to Green Bay for several days of meetings about the situation. END_OF_DOCUMENT_TOKEN_TO_BE_REPLACED