You are here: Home / Packers / Packers record remains perfect, but….. 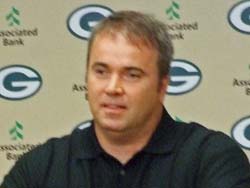 26 win over the Tampa Bay Buccaneers.  That record, and perhaps a couple of individual performances would be the only things perfect on Sunday.

One week after the Packers defense dominated the Minnesota Vikings, they returned to early against the Bucs, who piled up 455 total yards against the Packers.  It’s the sixth time this season that the Packers won a game while allowing 400 yards or more in total offense.

What has to be concerning to most Packers’ fans today is the simple fact that you can’t count on the defense and you certainly can’t count on special teams either.  If Aaron Rodgers has one of those rare off days, then the whole thing could go up in smoke at exactly the wrong time.

Without Aaron Rodgers on his “A” game, it’s conceivable that the Packers could fall victim to a team capable of beating them at playoff time.

Sunday, the Packers defense blitzed the Buccaneers repeatedly and struggled to get home.  Their tackling was atrocious, which is a good way to describe the special teams effort on this day as well.  Now throw in a day where Aaron Rodgers wasn’t his perfect self and you have potential issues.

The players keep saying things will turn around and get better, but when?  It appeared Sunday the defense took a step backwards.

Aaron Rodgers may not have played up to his standards yesterday, but he was still good enough to rescue the Packers from their first defeat.

Whether or not the Packers stay perfect throughout the regular season isn’t important.  What is important is that they shore up a leaky defense that could cost them their season come playoff time.  They have 6-weeks to figure it out, before it’s too late.