You are here: Home / Packers / Rodgers is AP Male Athlete of the Year 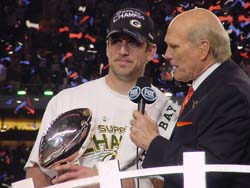 Athlete of the Year chosen by members of the “Associated Press” after his MVP performance in the Packers’ Super Bowl win in February and his play during the current season.

Rodgers received 112 votes out of the 212 ballots submitted from U.S. news organizations that make up the AP’s membership.

Rodgers is one of three quarterbacks to receive the honor in the past five years.  The last quarterback to win the award was Drew Brees of the New Orleans Saints last year.