A Minnesota woman and her 23-month-old daughter are lucky to be alive for the New Year, after she fell asleep and her vehicle landed in a western Wisconsin river.

The State Patrol said 21-year-old Daniella Overett of Elko dozed off at the wheel while heading west on Interstate 94 near Menomonie just after 5:30 yesterday morning. When she woke up from her nap, she realized her predicament.

According to the State Patrol, her vehicle was driving in a median just before the Red Cedar River crossing. It continued moving down the side of a bridge, over an embankment, and landed partially submerged in the river.

Officials said Overett was able to escape from the vehicle and grab her daughter. Overett climbed up the embankment in snow and single-digit temperatures. She was able to flag down a good Samaritan driving a semi.

Both mother and daughter survived with just minor injuries, and they were checked out at a hospital. Part of the freeway was closed for a short time yesterday while the vehicle was being removed from the river.

Midwest employers say they’ll hire six to 11 percent more people in the first three months of 2013, according to a report from the Brookfield staffing firm of QPS. Chief operating officer Dan McNulty says employers are more optimistic about the future now than they were about three months ago.

QPS surveyed 420 companies in Wisconsin, Illinois, Iowa, and Kansas City. It found 40 percent planned to have more employees than they did in the final quarter of this year, nine percent planned layoffs, and 51 percent said there would be no change.

When asked about the biggest issues facing their companies, 55 percent said it was the economy and 44 percent cited a lack of qualified employees, referring to the so-called “skills gap” that Governor Walker says he plans to address in the next state budget by increasing funding for employee training programs.

The recent mass shooting in Newtown, CT has driven calls for new gun control laws and other measures aimed at making schools safer, but Van Hollen says many more children are being harmed in horrible ways every day that go on without as much attention. Of particular concern to Van Hollen is child sex trafficking, which he says is a problem in the state that many people know almost nothing about. He says the victims are unlikely to report the crime to police, since they are either being threatened or are reliant on their pimp for food and shelter.

The attorney general says he hopes to intensify the Department of Justice’s focus on the issue over the next two years with additional funding from the state. Van Hollen’s budget request includes over $900,000 for additional resources and five new employees to focus full-time on fighting child sex trafficking.

Van Hollen says “there’s an awful lot we can do to protect our children based upon knowledge that we already have, I think we need to implement it.”

The request is being considered by Governor Walker, who will introduce his proposed biennial budget bill this spring.

Two giraffes were killed in a fire at a Wisconsin Dells attraction last night at the Timbavati Wildlife Park.

Owner Mark Schoebel said the fire quickly destroyed the giraffe barn, and two four-year-old giraffes were killed. He said they were among the most popular animals in the park, which also has kangaroos, large cats, antelope, zebras, and penguins. Schoebel said the park will replace the giraffes but quote, “It’s not an easy pill to swallow.”

The NBA announced today that Bucks guard Monta Ellis has been named Eastern Conference Player of the Week for games played Dec. 24-30.  The honor is the third of Ellis’ career and his first as a member of the Milwaukee Bucks.  Ellis won his first two Player of the Week Awards with the Golden State Warriors, the second of which came in his final week with the club before last season’s trade that brought him to Milwaukee.

Ellis’ Player of the Week honor is the second for a Bucks player this season.  Brandon Jennings received the award on Nov. 4 following the opening week of the 2012-13 season.

The Badgers entered East Lansing Michigan in January 2002 knowing they had a tough job ahead of them. Not only were the Spartans ranked 25th in the country, they also had the nation’s best and the Big Ten record 53 game home winning streak. After a slow start the Badgers got a spark in the second half and with just 25 seconds left, Freddie Owens hit the game winner for Wisconsin.

WRN Sports Director Bill Scott spoke with Owens about his game winning shot. “I just remember being wide open in the corner. I was initially going to shoot the jump shot but I saw a guy closing out and a couple of big guys flying at me. So I had to get the ball up high and it went in, luckily. We had a lot of contributions from a lot of different areas and stuck it out and got a gritty win,” said Owens. 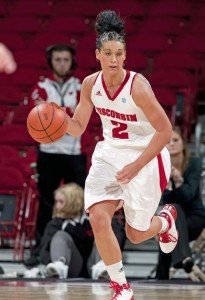 medical redshirt for the remainder of the 2012-13 season.  The 6’0 guard has been bothered by a re-occurring back problem this season.

Wurtz is scheduled to have surgery on Thursday before a six-to-eight week recovery period.  She will slowly progress into rehabilitation activities and return for the 2013-14 season.

Wurtz played in the first five games of the season, averaging 12 points and 7 rebounds per game but has missed the last eight games due to her back problem.

The Green Bay Phoenix got 21 points from Sultan Muhammad, including 5 of 6 from three-point range, to beat Illinois-Springfield 84-43.

Alex Brown added 16 points and 8 rebounds for the Phoenix in the win.

The Green Bay Phoenix women cruised to a 63-42 win over Wichita State.

Sarah Eichler had 15 points to lead the Phoenix.

The Milwaukee Bucks dialed up a huge victory over the Miami Heat on Saturday night at the Bradley Center.  They followed that up with a disappointing loss to the Detroit Pistons 96-94 on Sunday night in Auburn Hills, Michigan.

Detroit forward Tayshaun Prince hit a pair of free throws with 10.9 seconds left to give the Pistons the final margin of victory.

The Pistons blew a 14-point lead as the Bucks mounted a comeback in the 4th quarter.

Monta Ellis, who had a chance to tie in the final seconds, but missed a runner from about 12-feet.  Ellis had 30 points and Ersan Ilyasova added 24 to lead the Bucks.  Guard Brandon Jennings was held to 9-points.

The Bucks return to action Wednesday night against San Antonio at the BMO Harris Bradley Center.

The Wisconsin men’s basketball team’s Jan. 6 Big Ten Conference game against Nebraska will tip-off at 3:30pm (CT) in Lincoln on Sunday, instead of the originally announced 4:30pm tip time.

The game will air live on the Big Ten Network.  The Cornhuskers (9-4) are winless against the Badgers in Big Ten play after dropping both meetings last season.