You are here: Home / Brewers / Fielder: Good things come to those who wait 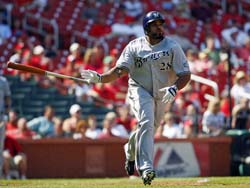 It’s the fourth richest contract in Major League Baseball history, behind the previous deals signed by Alex Rodriguez with the Rangers and then the Yankees, as well as the deal Albert Pujols got from the Angels this offseason.

It was thought that the Washington Nationals had the inside track, but Fielder instead is headed for Detroit.

The Brewers will get compensation in the form of a first round draft pick from the Tigers, number 27 in the upcoming draft.  The Brewers own the 28th pick already and they’ll also get a supplemental first rounder.

Fielder’s deal will average $23.8-million, just shy of the $24-million per season that the Angels will pay Pujols.

The Tigers became a player when they lost DH Victor Martinez to a torn ACL.