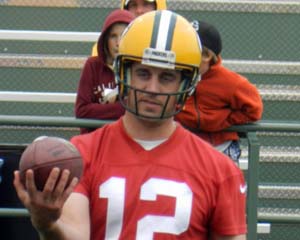 possibility after the uninspired performance by the league’s players in the 59-41 AFC victory in Hawaii, it appeared Goodell was making some real sense.

Apparently the players realized this wasn’t a good move, or at least the greedy stars wouldn’t be able to collect large bonuses for playing in the Pro Bowl, if there’s no Pro Bowl to play in.

So the players promised that the game will be more competitive and the NFL for at least once more season, will go ahead with the game, Jan. 27th in Honolulu, the week before the Super Bowl.

Green Bay Packers quarterback Aaron Rodgers was critical of the efforts of some players in the 2012 Pro Bowl game, which likely went down as the worst all-star football game ever played.

So how is this going to go?  The players union is balking at more games even in the regular season because of the length of the season, as well as safety issues.  It made perfect sense to get rid of this game before it hurt the NFL’s image even more.

Now, the same players that don’t want extra games for health reasons, are willing to make this all-star game more competitive.  How can this be accomplished without more contact and more risk?

Neither the players or the league has offered up any information as to how this game will get better without increasing the risk of injury.  In this person’s opinion, it can’t be done, or at least not enough to make this a watchable game.

Football is what it is.  It can’t be made exciting without the risk of injury that comes with it.  The NFL players will certainly increase its effort level, but it won’t take much to show more effort than what was on display during last season’s contest.