You are here: Home / Packers / Grant signs with Redskins 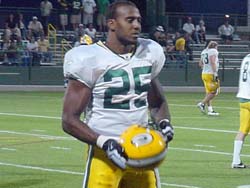 After going unsigned through the summer and the first three weeks of the 2012 NFL season, former Green Bay Packers running back Ryan Grant has signed with the Washington Redskins.

The Redskins were looking to add depth after losing a pair of backups on Sunday against Cincinnati.