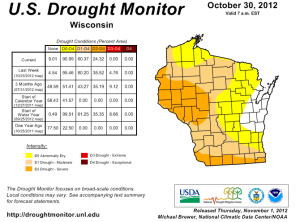 For the first time in months, the US Drought Monitor says no part of the Badger State is in an extreme drought. The report also shows that just under 91 percent of the state’s land area is abnormally dry or worse, continuing a steady decline in the drought of 2012 over the past few weeks.

The most severe conditions are in west central and far southern Wisconsin. Drought conditions no longer exist in all or parts of 11 eastern counties. Green Bay has fully recovered, along with Appleton, Oshkosh, Fond du Lac, Manitowoc, Sheboygan, and Door County.

A wet October helped. The National Weather Service says Green Bay was tied for the fourth wettest October on record, with just under five inches of rain during the month.

The other side of the state also had above-normal rainfall. La Crosse had over three inches of rain, almost 1.2 inches more than the norm.

It’s been dry this week in most of Wisconsin and forecasters say it will stay that way until at least until early Saturday when there’s a slight chance of rain or snow in southern and western Wisconsin.

Nationally, 60 percent of the 48 mainland states are still in some form of drought. However, the rains from Superstorm Sandy helped drop the total by two percent over the last week.