You are here: Home / News / Digging out begins 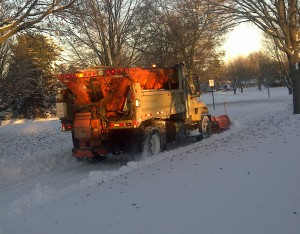 Even before Wisconsin’s massive winter storm had blown itself out late Thursday night, the task of clearing roads and restoring power was well underway. Utility crews worked to restore power to thousands of Wisconsin residents during the night – but as of 7:00 Friday morning, some 25,000 residential customers were still in the dark. About half those are in the Milwaukee area, where We Energies said it had over 13,000 without service across southeast Wisconsin. Wisconsin Power and Light said nearly 10,000 customers were still in the dark – most being in Dane, Fond du Lac, and Green counties. The Wisconsin Public Service utility said over 1500 hundred of its customers remained without electricity. They were generally in Door County and the Green Bay and Chilton areas.

The Wisconsin National Guard  was on standby during the blizzard, but said it received no calls for help as of Thursday. Some 100 Guard members at armories throughout the state were activated to help stranded drivers, help close roads, and check on people’s welfare as needed. And the armories themselves were to serve as emergency shelters. The Madison area received 13-to-20 inches of snow. A corridor from Platteville through Portage and into northeast Wisconsin picked up 14-to-16 inches. Many schools in those areas remain closed for a second straight day. The snow has stopped but the winds are still whipping it around and causing drifts. Gusts were still reaching 38-miles-an-hour on Friday morning at Antigo and Sturgeon Bay. Clearing skies are in the forecast, and single-digit lows are expected overnight.