You are here: Home / News / Madison mayor thanks city crews for blizzard efforts 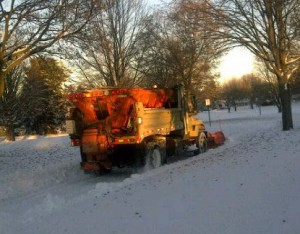 While the cleanup continues from Madison’s pre-Christmas blizzard, the city’s mayor took some time Wednesday to praise city workers for doing a “tremendous job” in battling the 15.2 inch snowfall.

“Just a big thank-you to all the city staff, in regards to what they did,” said Soglin. “We started obviously with Streets, that was out there for several days. But as we know it’s a team effort, and I really want to emphasize that.”

Madison was in the bull`s-eye of the major winter storm, which dumped wet, heavy snow across much of the state and resulted in school closures and a serious travel slowdown just before Christmas.

Soglin also emphasized that the cleanup isn’t done. The total cost to taxpayers from the storm that dumped 15.2 inches of snow on the Capital City is expected to run up to a half-million dollars.