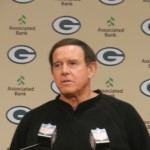 It shouldn’t be a surprise the Packers went defense in the first round of this years draft.  Green Bay’s biggest issue the past couple seasons hasn’t been scoring points, its been stopping their opponent from doing so.

Datone Jones will add versatility, athleticism, and speed to a defense that seemed to lack in all three areas at times in 2012.  Speed may be the easiest  deficiency to point out.  Just look at Green Bay’s 45-31 loss to San Francisco in the Divisional Round of the playoffs.  The 49ers ran right past Packer defenders on multiple occasions.  Packers defensive coordinator Dom Capers was asked if speed was a priority…

AUDIO: Dom Capers on if speed on defense is needed :20

So what will day 2 bring?  Many feel safety is the next biggest priority for the Packers.  Jonathan Cyprien of FIU and T.J McDonald of USC stand on top of the list of remaining players at that position.  The Packers could add another defensive lineman if they wanted to beef up inside; Ohio State Jonathan Hankins, Georgia’s John Jenkins and Alabama’s Jesse Williams remain on the board and would be viable options.

Or do the Packers turn their attention to the offense?  No running backs were picked in the first round, first time that happened in 40-years of the common draft.  Alabama’s Eddie Lacy and Wisconsin’s Montee Ball appear to be the top 2 although that position is deep and it could go by fit for a certain system.  The Packers also may look to replace WR Greg Jennings who left in free agency for Minnesota.  There is ample talent available and like running back, it will be based on fit.