You are here: Home / Packers / Thompson looks to get better in the draft

When you don’t dabble in free agency, the NFL Draft becomes all the more important.  That’s the way it is for the Green Bay Packers and general 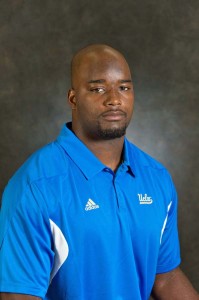 Thompson enters the 2013 Draft with 8 selections, including the 26th pick in the first round on Thursday night.

While Thompson has traded up three times last year and again in 2009 when he moved up to select Clay Matthews.  But the Packers GM has been more likely to trade backwards and acquire additional draft picks.

Many believe this draft is one of the weaker ones in recent memory, which if that’s true, could mean the Packers wouldn’t go backwards.

Last year, Thompson used the first six picks and six of eight overall on defensive players.  Defensive back Casey Hayward is the cream of that crop.  The others, Nick Perry, Jerel Worthy, Mike Daniels, Jerron McMillian and Terrell Manning.

The Packers could also be targeting a defensive tackle as well.  Veterans Ryan Pickett (DE) and nose tackle B.J. Raji are both in the final year of their contract.

The Packers ended up improving from 32nd to 11th in total defense.  Yet they could 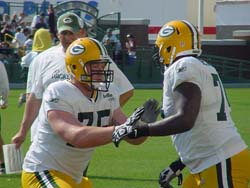 still use more help on that side of the ball.  They could use both a defensive tackle and a defensive end.  One name that’s being tossed around is UCLA defensive end Datone Jones.  His pass rush ability (3-4 DE) could be a good fit for the Packers.

The Packers have used draft picks on defensive ends Mike Neal, Jerel Worthy and Mike Daniels over the past few seasons.  Neal had his best season last year when he finally shook off the injury bug.

The Packers not only can use help on the defensive line, but the offensive line as well.    Tackles Bryan Bulaga and Derek Sherrod are coming off-injuries and the Packers don’t appear to be convinced that Marshall Newhouse is their long-term solution at left tackle.

At the very least, the Packers need some depth on the offensive line, so look for them to grab at least one player to help in that area.

Don’t be surprised if the Packers select a wide receiver later in the draft.  This is still a position of strength for the Packers, but getting a young player to develop wouldn’t be the worst move.

The Packers are meeting today (Wednesday) with Cedric Benson to check out the foot that he had surgery on last year.  There’s a chance the Packers could resign Benson for another year.  But there’s also a chance they could go into the draft at some point, and select a player at that spot.

Mike McCarthy said DuJuan Harris, who became the teams most consistent running back down the stretch last season, will be given a chance to hang on to a starting job and be a part of the rotation.  After Harris, the Packers have a handful of players that will go through camp and try to win a spot on the opening day roster.