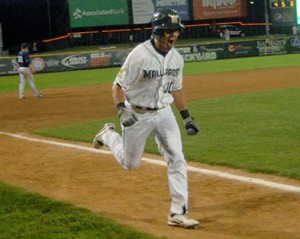 The Mallards scored six runs in the fifth inning, capped off by an Alex Bacon 3-run homer to left center.  It was Bacon’s second-consecutive night with a three-run home run to give the Mallards the lead.

The Mallards also got a 4 for 5 performance from John LaPrise.

The Mallards head to Duluth for game 2 of the World Series tonight.  They’re looking to wrap up their first Northwoods League Title since 2004.