You are here: Home / Packers / Packers shutout in preseason opener 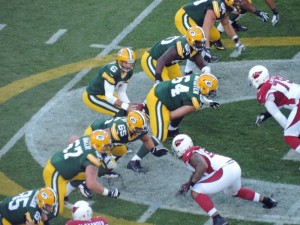 After Aaron Rodgers left, the Packers backup quarterbacks couldn’t get anything done.  Graham Harrell got the longest look, completing 12 of 19 passes for 76 yards, no touchdowns and 1 interception.  His quarterback rating was 49.5.

The ground attack wasn’t much better.  The Packers ran the ball 29 times for 89 yards, a 3.1-yard per carry average.

AUDIO: Aaron Rodgers on the Packers lack of a ground attack :09

The Packers didn’t get any field goal chances for their kickers either.  Mason Crosby and Giorgio Tavecchio are battling for the job in training camp but didn’t get to kick in the 17-0 loss to the Cardinals.

The Packers lost the turnover battle 2-0.  They’ll watch the film and make corrections tomorrow, then take Sunday off.  The Packers will play at St. Louis a week from today (Saturday).