You are here: Home / News / Power outages in wake of storms 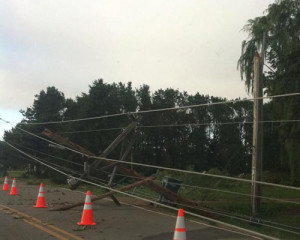 Severe weather overnight caused widespread damage in parts of Wisconsin overnight. “There was widespread straight-line wind damage across the Fox Valley area and extending to the Lakeshore,” said Tim Kickbusch is a meteorologist with the National Weather Service in Green Bay. “We did review some of the radar data, and we did see some circulations embedded in the leading edge of the line of thunderstorms.”

A severe storm that included either a tornado or straight-line winds caused major damage in the Maribel area of northern Manitowoc County. One of the structures that was demolished is the ‘old hotel’, a landmark near Maribel caves. County park superintendent Adam Backus said damage at Cherney Maribel Caves County Park is significant, so the park is closed until further notice. Village of Maribel president Dan Fels said they’re assessing damage this morning in the Manitowoc County community, inclduding downed trees.

Outagamie County Executive Tom Nelson said the majority of the damage is between New London and Wrightstown, on a path from Highway S on the north, to Highway 96 in the south. He declared a state of emergency for the county.

Surgeries were canceled this morning at Appleton Medical Center where power was knocked out during the night. We Energies reported over 53,000 customers in the Fox Valley were without power. Wisconsin Public Service said nearly 14,000 customers lost power in northeast and central Wisconsin. “They’re telling us, for the WeEnergies area, Weyauwega, Fremont, to plan on three days,” said Waupaca County emergency management director Andy Carlin. Waupaca County emergency management director Andy Carlin said customers there should also expect to be without power for three days.