You are here: Home / Badgers / Clement named Big Ten Freshman of the Week 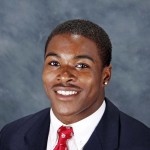 Week, following his second-straight 100-yard rushing performance in the Badgers’ 48-0 win over Tennessee Tech on Saturday.

Clement rushed for 149 yards on 13-carries and 2 touchdowns in the second half of Saturday’s 48-0 win over Tennessee Tech at Camp Randall Stadium.  One of Clement’s touchdown runs went for 75-yards.

Clements helped the Badgers produce three 100-yard rushers for the second time in as many games this season.  Wisconsin has now accomplished that feat in three of its last four games.

With his performance, Clement became one of just six FBS True Freshman to open a career with back-to-back 100-yard rushing games since Oklahoma’s Adrian Peterson set the NCAA freshman record with nine straight 100-yard games to begin a career in 2004.