The Green Bay Packers Hall of Fame Inc. announced today that it will induct former 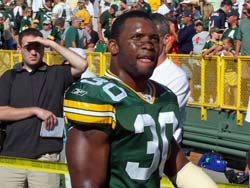 Packers players Ahman Green and Ken Ruettgers at the 44th Hall of Fame Induction Banquet, to be held Saturday, July 19, 2014 in the Lambeau Field Atrium.

Ruettgers, a first-round draft pick in 1985, played 12 years for the Packers (1985-96) and was a fixture at left tackle for more than a decade.  Ruettgers anchored a line that helped establish a new championship era for the team.