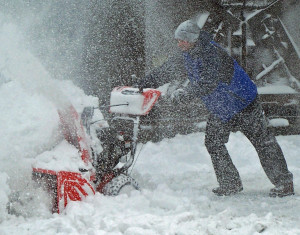 April snow is making for misery in much of Wisconsin. Some 2200 electric utility customers were without power as of late morning, in places where both freezing rain and snow caused problems. X-cel Energy’s website reported about 1300 customers out in the Eau Claire, Chippewa Falls, Menomonie, and Thorp areas. Wisconsin Public Service utility had about 880 customers in the dark, most in the Wausau area. Wisconsin Power and Light reported scattered outages in the south central part of the state.

Elsewhere, heavy snow was causing headaches. “We’ve gotten anywhere from 12 to 15 inches,” Bayfield County Highway Commissioner Tom Toepfer said at mid-morning. “We probably have got 30 to 40 mile an hour winds right now. Visibility is limited, roads are passable but travel is not recommended. We’re not having fun.”

The Polk County Justice Center and Polk County Government in Balsam Lake were closed for the day. “There’s quite a bit of snow, and it’s pretty slick underneath,” said Sheriff Pete Johnson. The decision was made to shut down just after 6:00 a.m.

Almost 18 inches of snow fell near Superior from Thursday through late Friday morning. Hawthorne received nearly 15 inches, 14.5 near Poplar, 11 inches at Gile along Lake Superior, and 10.5 inches near Stone Lake in Sawyer County. It’s been a long winter in this part of the state, which saw its first significant snowfall back in November. “We’ve been getting killed up here this winter,” said Bayfield County’s Toepfer, who credited the hard work put in by county highway crews. “The guys haven’t had much of a personal life this winter. It’s what we do, but that doesn’t lessen the fatigue.” Other areas of Wisconsin were getting a rain-snow mix, freezing rain, and light showers.