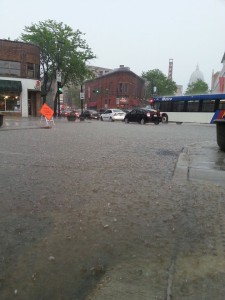 The weather is expected to moderate across south-central Wisconsin Wednesday and Thursday, after a wild Tuesday which saw a record amount of rainfall in Madison. The National Weather Service said many downtown streets were impassable early Tuesday evening due to high water. Flash flood warnings were issued and water was chest deep for a time near Warner Park on the city’s north side, where the home opener between the Madison Mallards and Kalamazoo Bombers was called off.

The Weather Service said Madison received a record rainfall for the date, 1.6 inches at the airport, breaking a record set in 1945. But NWS hydrologist Brian Hahn told the Wisconsin State Journal that radar estimates indicated 4 to 6 inches of rain fell on downtown and along parts of the Beltline highway between 5:00 and 7:00 p.m. Madison police and fire officials said no one was hurt during the flooding, but much of the Isthmus was in gridlock as the storm passed.

To the south, Brodhead in Green County had almost one-and-three-quarter inches of rain, and numerous streets in Beloit were flooded out after 9:00 p.m. In western Wisconsin, two-and-a-half inches of rain fell at Whitehall in Trempealeau County.