You are here: Home / News / Mother Nature makes up for lost time 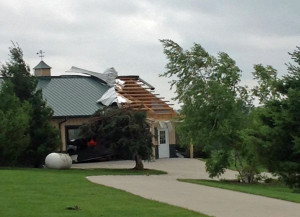 “Storm after storm after storm,” Pritchard says, “and they’ve all had very similar, you know, kind of scenarios where they they’ve had heavy rain, localized flooding, trees down, you know, heavy winds, even tornadic activity.”

We Energies says, at one point, 114,000 electric customers in southeast Wisconsin lost their power. That’s the most outages for a single incident since 2005. Numerous trees, power lines, and some barns and garages were blown down. Despite it all, nobody was killed, which Pritchard says is “amazing.”

“Considering some of the … the strength of these storms going through,” he explains, “we’ve been dealing with some, you know, EF-2, EF-3 tornadoes, which are kind of, you know, your mid range. They can do a lot of damage and, you know, they can kill people. And so we’ve really been fortunate. I think folks have really taken the warnings seriously when they are issued. They are taking cover and staying out of harm’s way.” 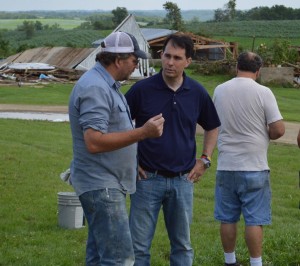 A school in Colfax reportedly had $1 million of damage from a tornado on Friday. A pair of tornadoes were confirmed near Dodgeville and in rural Dane County on Sunday. Wisconsin has an average of 23 tornadoes each year.

Pritchard says it’ll be a while before we know the total damage estimate of Monday’s severe weather, financially and otherwise. A tornado hasn’t yet been confirmed by officials. That is still being assessed. Last year Wisconsin had 16 tornadoes for the entire year. At 15 confirmed tornadoes this year, we’re already close to tying last year’s total and we’ve far surpassed 2012, which saw only 4 tornado touchdowns.

Governor Walker has been surveying the damage in areas throughout the state along with officials from Wisconsin Emergency Management to determine whether state agencies and the Wisconsin National Guard would provide aide to those affected by the storms. He urges residents to to sign up for emergency alerts through Ready Wisconsin.