You are here: Home / Brewers / Three Brewer starters bring up the bottom of NL lineup card 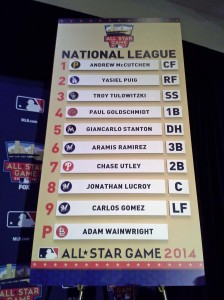 game is played tonight at Target Field in Minneapolis.

Former Brewer and current St. Louis Cardinals manager Mike Matheny announced his lineup yesterday.  He selected his own ace pitcher, Adam Wainwright, over Los Angeles Dodgers lefty Clayton Kershaw.  Kershaw is considered by many to be the best pitcher in all of baseball.

Wainwright enters the game tonight with a 12-4 record and a 1.83 ERA.  Kershaw is 11-2 with a 1.78 ERA.  Kershaw also has a no-hitter under his belt this season, plus 41 consecutive scoreless innings.

The fourth Milwaukee Brewer on the National League roster is closer Francisco Rodriguez.