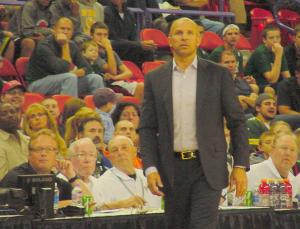 The Milwaukee Bucks committed 23 turnovers that led to 25 points in a 110-91 loss to the Minnesota Timberwolves in the team’s preseason finale at the BMO Harris Bradley Center.

Brandon Knight returned to the Bucks lineup and played 32 minutes at point guard.  It was good to get him back on the floor from injury, but Knight finished 0 for 8 and finished with just 1 point.  He committed 4 of the teams 23 turnovers.

Rookie Jabari Parker continued his excellent play during the preseason, scoring 18 points and pulling down 9 rebounds in the loss.

The Bucks pulled to within 53-47 at halftime, but committed five consecutive turnovers to start the third quarter.  Minnesota went on a 10-0 run to break the game open.

The Bucks 23 turnovers is a preseason high.

The Bucks now start getting ready for the start of the regular season, next Wednesday at Charlotte.