You are here: Home / Packers / Sitton not a fan of Thursday night football (AUDIO) 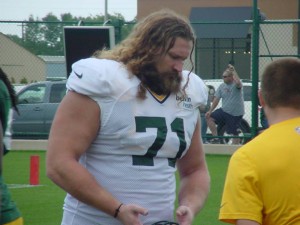 When teams play on a Sunday and then are scheduled for a short turn-around to play again on Thursday night, there’s no time to recover.

Monday, players reported early for strength and conditioning, followed by meetings and film study.  Their normal Tuesday day off turned out to be like a regular week Thursday, which is normally their longest practice of the week.

For the Packers, it was their main practice day in preparing for the Vikings, but because the players’ bodies are still recovering from the Sunday game, this practice is dialed back.

Today (Wednesday) is a walk through practice before Thursday nights game.

AUDIO: Sitton said it is what it is, just glad it comes early :16

Sitton said he’s glad it comes early.  If the Packers Thursday night appearance came in week 11 or 12 instead of week 5, it would have been tougher on the players.