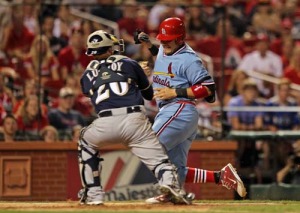 Jonathan Lucroy finished second to St. Louis Cardinal Yadier Molina at catcher.  Lucroy was trying to become the first catcher in Brewers history to win a Gold Glove award.  He ranked second in the NL with a .996 fielding percentage, behind only Cincinnati’s Devin Mesoraco.

The Gold Glove for Molina was the seventh of his career.

Gerardo Parra was bidding for his third Gold Glove award in the outfield but finished second to Atlanta’s Jason Heyward in right field.  Giancarlo Stanton of the Miami Marlins finished third.

The Brewers have had ten Gold Glove winners in their history, led by George Scott, who won five at first base.

The selection process is made up mostly by votes from managers and coaches who can’t vote for their own players.