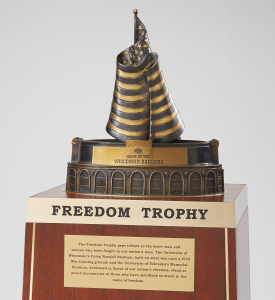 When Wisconsin and Nebraska hook up on Saturday at Camp Randall Stadium, they’ll not only be playing for the Big Ten’s West Division lead, but for the Freedom Trophy as well.

The trophy will be on the line for the first time this weekend, bringing recognition to two historic football venues and it honors our nation’s veterans.

The Freedom Trophy, designed and sculpted by Harry Weber of Wright City, Missouri, features a bronze football stadium with an American flag extending from the Center.  One half of the outside of the stadium depicts the North section of Wisconsin’s Camp Randall Stadium (built in 1917) and the other half the East side of Nebraska’s Memorial Stadium (1923).

The Badgers and Cornhuskers will now play each other every year as members of the West Division.

Since 1901, Wisconsin and Nebraska have met a total of eight times on the football field with each school winning four games.