You are here: Home / Packers / Aaron Rodgers nominated for NFL Man of the Year 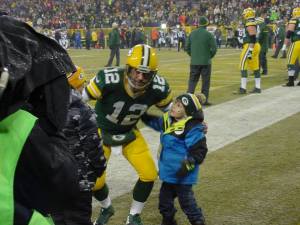 Only one player has ever won both the NFL MVP and NFL Man of the Year awards in the same season.  It’s former Bears running back Walter Payton, who the award is named after, back in 1977.

Green Bay Packers quarterback Aaron Rodgers is already a candidate for the NFL MVP award, now the league has chosen Rodgers as the Packers’ nominee for the Walter Payton NFL Man of the Year award, given for philanthropy and impact on their community.

The winner will be announced on the day before the Super Bowl in Phoenix.

For being named a nominee, Rodgers will have a $1,000 donation go to the charity of his choice.  If he finishes in the top three, $5,000 will go to his charity of choice.  Should he win the award, his charity will receive $20,000.