You are here: Home / News / Blast of cold temperatures heading for Wisconsin 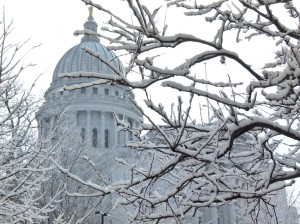 Windchill factors were in the minus-teens in far northern Wisconsin at midday Monday, and the rest of the state is about to get the same treatment.

The National Weather Service says a cold high-pressure system from Canada is bringing clear skies and Arctic temperatures to Wisconsin. Forecasts call for wind chills down to 20 below zero tonight in southwest Wisconsin, and 15 to 25-below for most other parts of the state. Actual temperatures at eleven this morning ranged from zero at Superior and Cumberland to 27 in Racine. They’re expected to drop down as low as nine below zero by Tuesday morning.

Spot along Lake Michigan will have the warmest readings, with lows of one to four below. The mercury might not climb above 20 degrees again until New Year’s Day, when the clouds are expected to return. The next chance of snow in the state is on Friday.