You are here: Home / Sports / Bucks fall in Portland 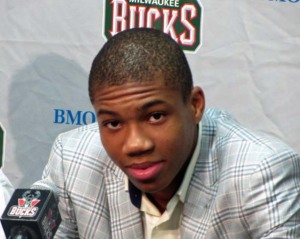 Already playing without the second overall pick, Jabari Parker, the Milwaukee Bucks received another scare in their 104-97 loss to the Portland Trailblazers.

Late in the first half, Giannis Antetokounmpo went down hard with what turned out to be a sprained ankle.  He ended up walking off but wouldn’t return, which meant the Bucks now had to deal with the Trail Blazers with out their top two stars.

The Bucks were out-rebounded by Portland 52-32 but still stayed within striking distance throughout.

Brandon Knight scored 24 points and Khris Middleton added 17 for the Bucks.  Damian Lillard had 29 points and 7 assists for Portland.

The Trail Blazers improved to 12-1 against Eastern Conference teams and 12-2 at home this season.

The Bucks are 1-1 on the trip out west.  They’ll face the Kings in Sacramento tonight.