You are here: Home / Sports / Germantown’s legendary coach passes away 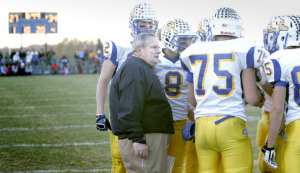 Phi Datka, who led Germantown to state football titles in 1998 and 2003, passed away Tuesday morning at the age of 69.

Datka spent 42 seasons as the head coach at Germantown, retiring after the 2010 season.  He coached 43 seasons in all, stacking up 280 career victories, which ranks 8th on the alltime state victory list in Wisconsin.  Datka was elected to the Wisconsin Football Coaches Association Hall of Fame in 1998.

Datka won eight conference championships and made four trips to the state championship game, finishing as a runner-up in 1979 and 1997.

Datka was also athletic director at Germantown until he retired from that position in 2003.  He went on to serve as head coach at the school for seven more years.