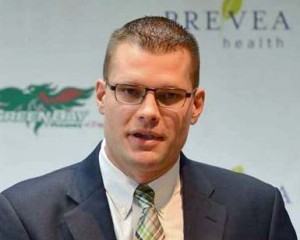 The Phoenix started fast, jumping out to a 29-6 lead and leading by as many as 31 points with just under 12-minutes remaining.  But Milwaukee hit six of their nine 3-point attempts in the second half as the Phoenix let their foot off the gas.

Milwaukee managed to cut the Green Bay lead to 10 on a couple of occasions in the final minutes, but that’s all the closer they would get.

The Phoenix shot 55% from the field, holding the Panthers to 39.7% shooting.  Green Bay held Milwaukee’s leading scorer, Steve McWhorter to 5 points on 1-for-12 shooting.

Alphonzo McKinnie had 23 points and 10 rebounds and Carrington Love added 19 points.  Keifer Sykes, who scored 32 points in the first meeting in Milwaukee, was held to 12 points last night.  But Sykes moved into second place on Green Bay’s all-time scoring list behind Tony Bennett.

The Panthers got 22 points and 12 rebounds from Matt Tiby, but dropped to 0-11 on the road this season.