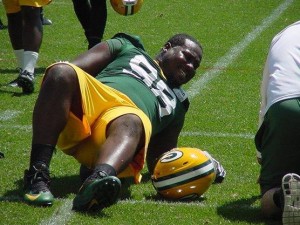 You can add a felony gun charge to the list of charges that Green Bay Packers defensive tackle Letroy Guion is facing.  He was arrested in his hometown of Starke, Florida last night.

According to a police report, Guion was pulled over for “failure to maintain a single lane.”  At that point, the police officer smelled marijuana.

It was at that time that police searched the truck and found more than $190,000 cash inside a bag which also contained 357 grams of marijuana.

Guion informed police that he had a weapon that was registered to him, and they found a 9mm semi-automatic handgun.

The 27-year-old Guion joined the Packers last offseason and recorded 3.5 sacks, while starting every game.

He came relatively cheap to the Packers, playing for $1 million dollars on a one-year deal.  Guion and the Packers had been discussion a long-term deal.

The Packers say they are aware of the arrest but wouldn’t comment any further.