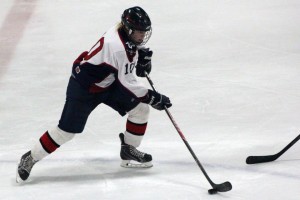 Tomlinson helped Waupaca advance out of regional play by scoring her 13th hat trick of the season in a 5-4 win over Fond du Lac (Co-op).  In that game last week, Tomlinson’s second goal forced overtime and her third goal won it 3:09 into overtime.

Tomlinson has started all three years for a program that’s in just its 3rd season of operation.  She played on the boy’s high school team as a freshman.

Going into tonight’s game against Bay Area, Tomlinson has tallied 60 goals and 38 assists for 98 points, which is the best in Wisconsin.  In the last two seasons combined, Tomlinson’s numbers total 94-goals, 52-assists for a total of 146-points.

Tomlinson’s line is also the top scoring line in the state and Waupaca is 23-2, with the only losses coming to University School and Northland Pines, both on the road.

Tomlinson also played for Team Wisconsin’s U-19 team last fall and will again this fall.  She plans to play hockey at UW-Superior later this year to study Chemistry, unless a D-1 school comes calling.

Mandy Tomlinson was nominated as one of 11 players around Wisconsin for the coveted Miss Hockey Wisconsin award, given to the top female high school hockey player in the state.

Six finalists for the award were recently announced by the Girls Wisconsin Hockey Coaches Association (GWHCA).  Surely Tomlinson, the state’s top point producer, is certain to be one of the six, right?  Wrong!!!

It seems that the political garbage that seems to hit most if not all coaching groups that vote on such matters, has come into play again.

The six finalists (5 plus a tie) that were selected are Lauren Smith from Northern Edge, Natalie West from Appleton United, Kenzie Torpy from Stoughton, Courtney Wittig of Bay Area, Jacyn Reeves of Onalaska and Nina Anderson from University School.

Waupaca beat Northern Edge twice, 6-5 and 3-2.  In the two games, Mandy Tomlinson had a goal and 4 assists while Lauren Smith had two assists.  For the season, Tomlinson 98, Smith 56.

Waupaca played Stoughton once, winning 3-1.  Tomlinson has a goal and an assist against Iceberg goaltender Kenzie Torpy.

Waupaca has yet to play Bay Area, that comes tonight.  For the season, Tomlinson 98, Courtney Wittig 61.

Waupaca has not played Onalaska.  For the season, Tomlinson 98, Jacyn Reeves 45.

Each one of the six named finalists are outstanding players, but their numbers pale in comparison to that of Tomlinson from small town Waupaca.

Other than the goaltender, Tomlinson’s point total of 98, roughly doubles the point totals of the other finalists.  So how can she be left out of the finalist group?

The GWHCA lists 33 coaches as members.  According to one source, only coaches who pay a $100 association “membership fee” are allowed to vote for Miss Wisconsin Hockey.  That left 18 coaches actually voting for this years player-of-the year award.

Associations that are afforded the honor of voting for the best player in the state are supposed to get it right.  Size of the program shouldn’t matter.  Although certainly the small school Waupaca Co-op program, playing against some of the state’s biggest programs, should have worked for Mandy Tomlinson, instead of against her.

Tomlinson is also an all-conference volleyball player, three years all-conference in softball and has a 4.0 GPA (Valedictorian of her Class).  That doesn’t make her the best girls hockey player in Wisconsin.  But 60 goals and 38 assists for a total of 98 points sure does.

Shame on the coaches who voted, that didn’t see to it, to do the right thing by making Mandy Tomlinson at the very least, one of the six finalists for Miss Hockey Wisconsin.  She certainly deserved better.  What she didn’t deserve, is to be treated as an outcast by a handful of coaches playing the political game and only looking out for number-1.