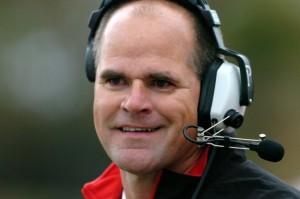 Kenosha County Sheriff’s Deputies & Somers Fire-Rescue responded Tuesday morning for a jeep that veered off into a ditch, with the driver not moving.  Lifesaving efforts at the scene and into the hospital proved futile.

Rucks led the Carthage football program from 1996 until 2012, after having played for the legendary Art Keller from 1979 to ’82. As a senior in 1982, he was named first-team All-CCIW offensive tackle.  He graduated in 1983 with a double major in English and political science.  Rucks was selected in the third round by the Denver Gold in the inaugural United States Football League draft before signing as a free agent with the NFL’s New York Jets.

Rucks stepped down for medical reasons in 2012, and for the past two years, was an assistant athletic director and academic advisor.  Carthage Athletic Director Bob Bonn says Rucks was “one of the kindest people I have or will ever know,” and it’s a terrible loss for the Rucks & Carthage families. Carthage is planning a candlelight vigil for the community, with flags on campus now at half-staff.

(Thanks to Tom Karkow from WRJN in Racine)