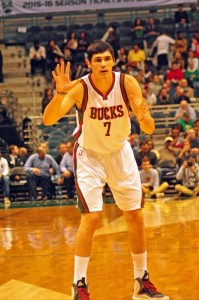 Ersan Ilyasova missed a wide-open three-pointer at the buzzer as the Milwaukee Bucks dropped their 9th straight road game, 85-84 against the Pelicans in New Orleans.

The Bucks ran a play that worked just the way it was drawn up, but Ilyasova’s three-pointer rimmed in and out, sending the Bucks to defeat.  It’s their 10th loss in the last 13 games overall.

The Bucks defense held Pelicans forward Anthony Davis to 20 points on 6-of-18 shooting.  Davis had 43 points in Milwaukee a week earlier.

The Bucks remain in sixth place in the Eastern Conference playoff race with 15 games left to play.  But their lead is now 3 1/2 games on Boston, Indiana and Miami.  All three of those teams play tonight.  The Bucks return home to host the San Antonio Spurs at the Bradley Center tonight.