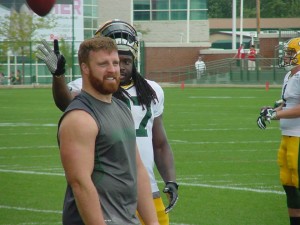 Green Bay Packers fullback and fan favorite John Kuhn is back for a 9th season in Green Bay.  Kuhn has reached a deal with the Packers on a one-year deal at the NFL veteran minimum of $870,000.  The deal also includes workout and Pro Bowl bonuses.

Kuhn bulked up last season for blocking purposes.  His snaps were down, but he did earn All-Pro honors.

ESPN.com’s Rob Demovsky reported today that the Packers informed safety Sean Richardson that they have matched the Oakland Raiders’ one-year, $2.55 million offer sheet, which means Richardson will be back in a Packers uniform for the upcoming season.

The Packers had originally given Richardson the lowest restricted free-agent tender of $1.542 million.

Richardson appeared on more special-teams plays than any other player on the roster last season.

The Packers are glad to have Richardson back for more than special teams.  He backs up Morgan Burnett and Ha Ha Clinton-Dix at safety.  The Packers have already lost Tramon Williams to Cleveland and Davon House to Jacksonville in free agency.