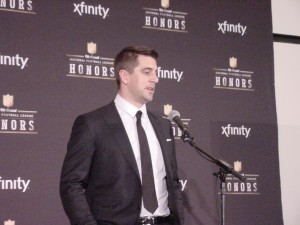 Green Bay Packers quarterback Aaron Rodgers is set to appear on the “Celebrity Jeopardy” episode that airs at 6 pm in the Green Bay-Appleton market on Tuesday night.

The episode was taped back in March and also features Kevin O’Leary from ABC’s “Shark Tank” and retired astronaut Mark Kelly.

Each celebrity will be playing for the charity of their choice.  Rodgers’ charity is the Midwest Athletes against Childhood Cancer Fund, a Wisconsin-based nonprofit that funds childhood cancer and related blood disorder research.  Rodgers has been involved with the MACC Fund for several years.