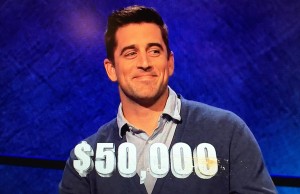 Rodgers wound up with $8,399 in the game.  The total was higher, but he missed the Final “Jeopardy!” question.  The answer was photos of two early 20th-century businessmen in motorcycles with sidecars.  The correct question:  “Who were Harley and Davidson?”  Rodgers’ answer was, “Who are Ernst & Young?”.

The shows host at the end even mimicked Rodgers’ championship-belt wearing move.