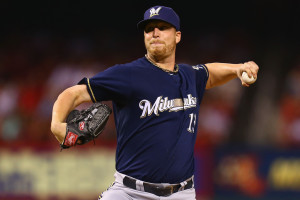 The umpires gathered around Smith, checked the substance, and promptly threw the lefty out of the game. Braves hitters then registered five consecutive hits off relievers Neal Cotts and Michael Blazek to blow the game open.

Starter Matt Garza (2-6) had held the Braves to one run on two hits prior to the seventh. He takes the loss and officially gets tagged for four runs on five hits going six-and-a-third innings.

Milwaukee’s lone run came in the when Ryan Braun followed a Carlos Gomez walk and Gerardo Parra single to plate Gomez with a sacrifice fly to center.