You are here: Home / Fires/Accidents/Disasters / Tornado that hit UW-Platteville did $18.6 million in damage 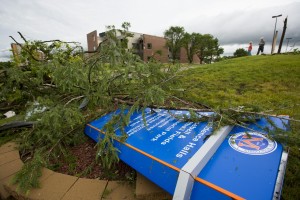 It’s been almost a year since a tornado hit the University of Wisconsin Plateville campus, and officials finally have a final tally for the damage caused by the storm. Figures released by the UW-Platteville show the June 16, 2014 EF-2 tornado caused $18.6 million in damages.

The storm impacted five buildings, the campus grounds, and Memorial Park. Damage included broken windows, roof damage, downed trees, and bent light towers at the Ralph E. Davis Pioneer Stadium. It did not cause any fatalities or significant injuries.

In a statement, Chancellor Dennis Shields noted that few signs of the tornado remain now. “Walking around campus, I see very few signs of the damage. That is a testament to all the hard work and extra hours that people put in to ensure we had a successful academic year.”