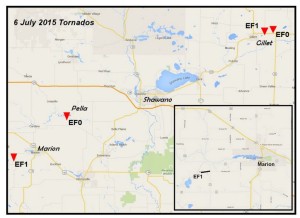 The National Weather Service has confirmed at least four tornadoes touched down in the state on Monday night.

According to a preliminary analysis, the NWS said Tuesday that the twisters hit along a line stretching from outside Marion in northern Waupaca County, near Pella in central Shawano County, and just outside Gillett in western Oconto County. They included three EF1 tornadoes and one EF0.

The storms left a path of damage to building across the region, including tearing the roof off of a home with a mother and her three children inside. There were no reports of injuries.