You are here: Home / Packers / Quarless trying to deal with loss of a child 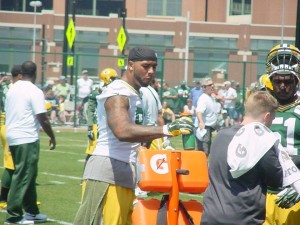 Quarless returned to the team on Saturday, then following today’s (Monday) workout, he explained to the media just went wrong.

With tears in his eyes, Quarless told reporters that his daughter died upon delivery on Wednesday.  “Probably the saddest day of my life.” he said.

Quarless thanked his coaches and teammates for the type of support he has received.

Quarless said, “It felt real good just to get out there, catch some passes, be able to run around a little bit, kind of get back to your old self and get back into things. I’m looking forward to moving on in this camp and getting ready for the season.”

Quarless was arrested in Miami Beach, Florida, for allegedly firing a gun in public in the early-morning hours of July 4.

The Packers tight end feared the Packers might cut him after the incident and described coach Mike McCarthy as being very upset during their first conversation.

“I just apologized to him for bringing negativity to this place,” Quarless said.

Quarless has a court hearing scheduled for Aug. 24, the day after the Packers’ preseason game at Pittsburgh.

AUDIO: Andrew Quarless says it is a sad time :15