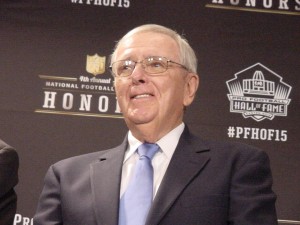 Wolf joined the Packers in 1991 and led the franchise’s turn-around.  He started by hiring Mike Holmgren as his coach and trade a first round pick to Atlanta for quarterback Brett Favre.  Once the ball started rolling, then it was time to make a big free agent splash.  That’s when Wolf enticed Reggie White to sign with the Packers.

That group would eventually go on to play in two Super Bowls, winning one of them.

Ron Wolf has great respect for the game of football and the NFL.  Today’s induction is the ultimate honor for him.  The Green Bay Packers play in the smallest NFL city, but Wolf led the turn-around that has been carried on by the likes of Ted Thompson, Mike McCarthy and Mark Murphy today.

When Vince Lombardi left Green Bay, there were many years of bad football being played in Green Bay.  Bob Harlan, Ron Wolf, Mike Holmgren, Brett Favre and Reggie White were the key pieces to the puzzle.  But it was Ron Wolf that orchestrated all of the moves.

What the Green Bay Packers are today, with a newly renovated Lambeau Field, happened primarily because of Ron Wolf.  He was the main contributor to what is truly America’s Team.  That is why he is one of eight people entering the Hall of Fame today, and it fittingly comes in the contributor category.

AUDIO: Eliot Wolf said what his dad did in Green Bay is really something :23

AUDIO: Eliot Wolf on being asked to present his dad for HOF :11