You are here: Home / Packers / Manning joins Favre as only 70-thousand yard passers in NFL 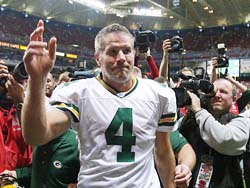 Manning became the second quarterback in NFL history to do so, joining former Packers great Brett Favre, who holds the record with 71,838 career passing yards.  Barring injury, Manning should surpass that total this season and become the all-time yardage passing leader in NFL history.

Manning finished with 256 yards, three touchdowns and one interception.  He helped direct a late fourth quarter drive that tied the game against the Chiefs at 24-all.  Then Jamaal Charles fumbled the ball with Denver’s Bradley Roby scooping the ball up and returning it 21 yards for the winning touchdown with 27 seconds left to cap another Peyton Manning comeback.

The Chiefs ended up scoring two  touchdowns within nine seconds of each other to pull out the win.

Favre is a sure bet to be inducted into the Pro Football Hall-of-Fame in Canton, Ohio next year, in his first year of eligibility.