You are here: Home / Packers / Rodgers named N-F-C Offensive Player of the Week 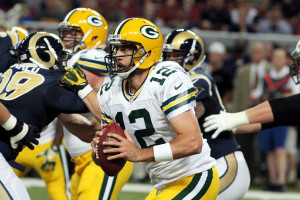 Green Bay Packers quarterback Aaron Rodgers has been named the N-F-C’s Offensive Player of the Week.

Rodgers completed 24 of 35 for 133 yards and five touchdown passes with a passer rating of 138.5 in the 38-28 win over the Kansas City Chiefs on Monday night.

It marked the fourth career game with at least five touchdown passes and no interceptions, passing Brett Favre for the most in franchise history.

Including the postseason, Rodgers has now thrown 580 consecutive passes and 48 touchdown passes at Lambeau Field without an interception.  Both are N-F-L records.

This is Rodgers 13th career Player of the Week Award.  That is also the most in franchise history, surpassing Brett Favre who had 12.