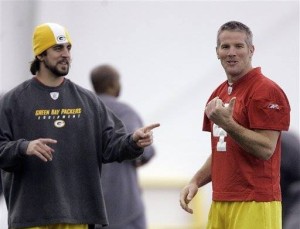 Green Bay Packers quarterback Aaron Rodgers is looking forward to seeing Brett Favre and Bart Starr return to Lambeau Field on Thursday night as Favre’s retired number-four will be unveiled along with his name on the Lambeau Field façade.

Rodgers recalled on Tuesday just how big of a prankster Favre was when the two were together from 2005 through 2007.

Favre placed Rodgers helmet on a table inside the Packers’ locker room with a couple of markers.  Players often place memorabilia they need signed for charity or for their own collections in the middle of the locker room to be signed.

Rodgers helmet wasn’t a replica though, it was the real deal.  Everybody signed it, even Rodgers himself.  He was eventually let in on the secret and ended up having to use the helmet for practice that day, with all of the signatures.

The relationship between the two turned sour during the 2008 Packers Training Camp.  Favre’s departure got ugly and Rodgers took a lot of the heat.

Since then, things have settled down, to the point where Thursday’s ceremony will be celebrated by the fans and supported by Rodgers, who will likely be in the locker room making halftime adjustments during the Packers/Bears game.

Rodgers said he’ll find a way to meet with Bart Starr before the game to thank him for all the support and encouragement he has provided throughout the years.

AUDIO: Aaron Rodgers on Brett Favre’s days as a prankster :23