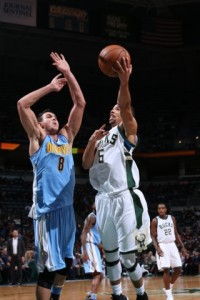 The bench has been a sore spot for the Milwaukee Bucks much of the season.  Monday night, that bench bounced back and helped the Bucks snap a three-game losing streak, beating the Denver Nuggets 92-74.

The Bucks outscored the Nuggets 25-14 in the fourth quarter to break the game open.  They held Denver to 37% shooting from the field and forced 24 Nugget turnovers.

The 74-points allowed is a season best for the Bucks, who will travel to San Antonio on Wednesday.

AUDIO: MCW says he had a different attitude tonight :12

AUDIO: MCW on the Bucks defense :12