You are here: Home / Sports / Giannis gives fans another peak at the future (AUDIO) 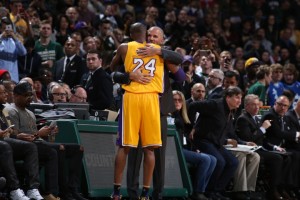 There’s no doubt that Los Angeles Lakers guard Kobe Bryant has star power.  There’s not a lot of players that have the ability to sell out the BMO Harris Bradley Center on a Monday night, but that’s what happened.

The sellout crowd of 18,717 fans came out to pay tribute to Bryant, one of the NBA’s all-time greatest players.  Bryant isn’t the player he once was, but still gave the Milwaukee crowd reason to cheer, scoring 15-points and pulling down five rebounds in a 108-101 Bucks victory.

But it was Bucks youngster Giannis Antetokounmpo that ended up stealing the show, collecting his first career triple-double with 27 points, 12 rebounds and ten assists in the Bucks win.  Giannis also added four blocks and three steals.

The Bucks led by 28 points in the fourth quarter as the Bucks won their second straight game and four out of their last five.

Bryant said he’s enjoyed playing in Milwaukee.  His best memory came in 2009 when he hit a buzzer beater in overtime.

The Bucks are off until Thursday when they face the Celtics in Boston.