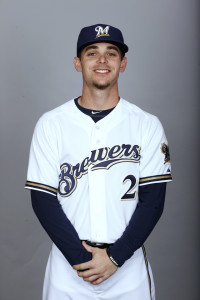 Scooter Gennett made a successful Cactus League debut on Thursday, helping the Milwaukee Brewers pull out a 5-2 win over the Texas Rangers in Surprise, Arizona.

Gennett has missed the entire spring with a sore shoulder but returned in the designated hitters role last night.  He singled, doubled and homered in three at-bats, finishing a triple shy of the cycle.

Taylor Jungmann gave up one single and one walk in four scoreless innings, as the Brewers improved to 8-6-and-1 in the Cactus League.

Reliever Yhonathan Barrios will not start the season in the bullpen, after the team sent M-R-I results on a serious shoulder injury to famed surgeon James Andrews for a second opinion.