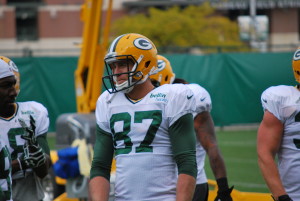 Certainly we won’t know just how well Nelson will do in his attempt to come back from his injury until he truly steps back on the field and competes in training camp and into the season.

“I think it’s a waste of time if you do,” Nelson said when asked if he’s worried about returning to his Pro Bowl form. “Because if I do lose a step, there’s nothing I can do about it. “I’ve attacked the rehab the way I wanted to; it’s progressed the way I wanted to. I continue to work out the way the coaches and trainers want me to. We’ll do everything we can to make sure I’m ready to go.”

Nelson said he doesn’t anticipate having any restrictions during the initial phase of the offseason program, but OTA’s will be up for discussion on how much he’s able to do there.

Nelson said, “We’ve been running. We’ve been lifting. We pretty much did the whole offseason program that they sent home with everyone else. So we’re right where we want to be.

AUDIO: Nelson says he doesn’t have any doubts :19

AUDIO: Jordy Nelson is excited to get the ball rolling :22